Skip to content
Previous Next
My Kenya Safari Adventure, Part I

My Kenya Safari Adventure, Part I

From Baboons to Zebras

Darkness was descending quickly upon us as we bounced our way across the rutted savannah, looking up into every tree and scouting the underbrush. We had spent most of two hours searching to no avail for a brief glimpse of the illusive spotted leopard.

Earlier in the afternoon, we paused to observe a herd of at least 10 elephants protecting half a dozen caves, including one with unsteady legs and assessed by our guide to be a newborn. During our second animal drive of the day, we also witnessed a large male giraffe unsuccessfully wooing a younger female, who rejected his every overture for almost 30 minutes before slipping away with a different suitor.

Maasai warriors entertaining us with traditional was dances around a blazing campfire.

With dusk fading into night, we abandoned our leopard search, accepted the fact we weren’t going to see one that day and headed back to the Fairmont Mara Safari Club. Along the way, however, we were surprised by a stop in the bush, where Maasai warriors greeted and entertained our small group with traditional dances around a raging campfire before we enjoyed dinner under the stars.

It’s difficult preparing for your first safari no matter how much you read or study the experiences of other adventurers. You also might consider such a journey as the “trip of a lifetime” as I had ― but much to my surprise, I began thinking about my next Micato Safari during my long flight home.

I anticipated numerous close-up encounters with wild animals of all sizes and temperaments, living and surviving in their natural habitat. The overall experience, however, quickly evolved as a deep dive into Kenya’s history and culture, as well as an opportunity to observe firsthand the country’s extensive wildlife conservation efforts. Furthermore, I found the Kenyan people to be welcoming and proud to share insights into their heritage and modern lifestyle. 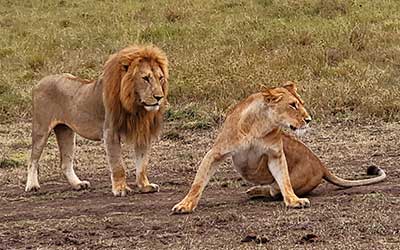 Guess who’s the boss of this couple.

My adventure began following a 28-hour, two-stop flight to Nairobi ― the only national capital in the world with a national park fully contained within its boundaries. While fenced on three sides, the Nairobi National Park is open on its southern boundary allowing wildlife to move freely between the park and the Kitengela plains.

Following a day of rest and recovery at the Villa Rosa Kempinski, we set out for the park navigating our way through the daily traffic gridlock generated by Nairobi’s six million residents. Our experiences visiting the Sheldrick Elephant Orphanage and the Rothschild Giraffe Center, both located within the park, were our first wild animal encounters, albeit in a controlled educational environment.

Getting to know a Rothschild giraffe is easy when you have a handful of kibble to share.

The Sheldrick Wildlife Trust rescues and rehabilitates orphaned elephants, caring for them and preparing for their eventual safe return to the wild. It was feeding time for the baby elephants ranging in age up to five years. The caretakers fed them a special formula from oversized, hand-held baby bottles and served up plenty of bushy leaves for dessert. The trust’s mission also includes defending pachyderms from poachers in the wild.

Meanwhile, the nearby giraffe center focuses on saving the Rothschild giraffe from extinction through its special programs and public education. About 60 percent of the world’s remaining population of this endangered species resides in Kenya. Having a 13-foot-tall giraffe eat kibble off of the palm of my hand was a terrific way to learn all about a wild animal with a long tongue and an even longer neck.

Elephants and flamingos make for strange neighbors but they peacefully co-exist and thrive in and around Lake Amboseli.

We departed Nairobi early the next morning for Amboseli National Park on our first of three flights aboard a single engine, 11-passenager aircraft commonly used to ferry many of the more than 120,000 annual park visitors from Nairobi. The flight took only about 40 minutes compared with at least half a day, had we driven from Nairobi.Two Micato drivers and their safari vehicles awaited our arrival as our plane rolled to a stop on the short airstrip. Our first real animal drive would soon be under way!

For Part Two of my safari experience, please watch for my next blog post,
exploring life on the savannah and the green hills of Kenya.