Skip to content
Previous Next
Discover the Pearl of the Adriatic

Discover the Pearl of the Adriatic 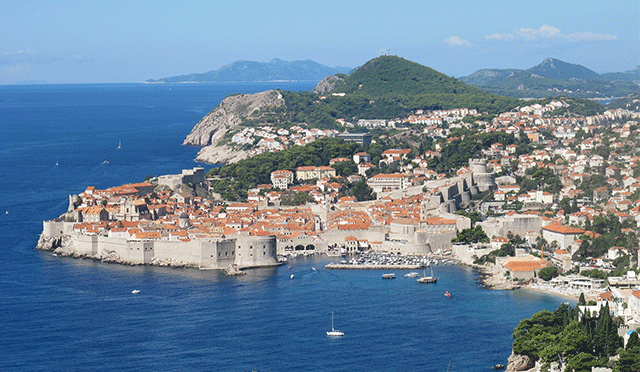 The fortress wall surrounding Old Town has protected Dubrovnik for hundreds of years.

When people consider a European beach vacation, they likely think first of Spain’s Costa del Sol, France’s Côte d’Azur or the colorful Cinque Terre region of Italy. A growing number of leisure travelers, however, have discovered the Pearl of the Adriatic ― Dubrovnik and Croatia’s beautiful Dalmatian coast.

Most North American’s visiting Croatia for the first time do so from a cruise liner with port calls in Split and Dubrovnik but they only experience part of day at each stop. To become fully immersed in local history, culture and cuisine, I recommend an independent land tour of the region or, better yet, a few nights in Dubrovnik followed by small boat cruise along the coast exploring the hundreds of islands and inlets that make up the Dalmatian archipelago.

Located southeast of Venice, Croatia dates to the seventh century with a history encompassing 1,400 years of influence, and sometimes domination, by Romans, Ottomans, the Austrian-Hungarian empire and the Soviet Union, among others. As part of Yugoslavia, Croatia gained its independence from the USSR in 1991, but it took a civil war for Croatia to achieve status as a parliamentary republic. Damaged by shelling during that war, much of Dubrovnik’s Old Town has since been restored following UNESCO’s strict guidelines.

Dubrovnik attracts more than a million travelers annually, so I recommend visiting in May or early fall to avoid summer heat and peak season crowds. Four and five-star accommodations are located in the heart of Old Town and represent the best way to experience local night life and unique dining options. For example, you might choose to dine in a café set among Roman ruins offering outstanding fish and grilled meat entrées prepared in traditional Croatian style. Lower priced hotels and apartments may be available nearby but most lack the authenticity of Old Town.

The city hosts nearly 90 festivals throughout the year, including a 45-day summer festival featuring live plays, concerts and games. It’s also home to several Renaissance structures that survived a 17th century earthquake. Among the notable sites are Saint Blaise Cathedral, named for the city’s patron saint; Arboretum Trsteno, the world’s oldest arboretum pre-dating 1492; and Europe’s third earliest pharmacy and in continuous operation since 1317.

You also must visit the Renaissance era Sponza Palace, which houses Croatia’s national archives and, time permitting, experience “The Game of Thrones” tour that will take you to  Dubrovnik area locations depicted in the film. Don’t miss walking around the 2.2-kilometer long fortress wall surrounding Old Town for fabulous sea and mountain vistas (go early in the morning for the best photo opportunities). Several nearby public beaches also are worth your time, especially if you are only visiting the city.

With options ranging from private yacht charters to various four to seven-night itineraries on ships accommodating up to 50 guests, cruising the Dalmatian coast rounds out your Croatian experience. As you cruise between Dubrovnik and Split, you will visit national parks in the archipelago and enjoy several island villages, as well as beach and swimming opportunities. Pack swim shoes, however, because the beaches may be covered with pebbles and you also may encounter sea urchins.

Discovering the Pearl of the Adriatic takes you a little off the beaten path for low-impact nature adventure, history, culture and regional cuisine, while exploring the crystal-clear waters surrounding ancient islands.