Valencia or Lyon are not likely on the travel itineraries of many American tourists but they should be.

Instead of concentrating solely on the major European capitals when planning a trip abroad, also consider cities in the shadows of better-known destinations. Many such cities dot the landscape across Europe, offering special and frequently more authentic travel experiences. Let me highlight why these two smaller cities should be on your bucket list. 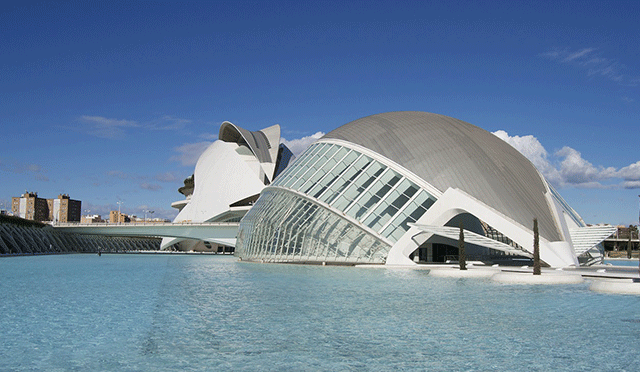 Spain’s third largest city, Valencia frequently takes a back seat to Madrid and Barcelona by tourists who have yet to discover the City of Arts & Sciences and its unique combination of modernist architecture and culinary delights. For example, you will find several opportunities to learn the secrets of authentic Valencian paella, since paella originated there. You also must try a pitcher of Agua de Valencia, the local version of sangria featuring its world-famous oranges.

For striking architectural contrast, visit the Palau de Les Arts for a tour during an opera rehearsal or one of the other five arts zones wrapped in ultra-modern architecture. Next tour the 800-year-old Valencia Cathedral, which claims to house the Holy Grail, or explore medieval castles and towers in Old Town. Spend time discovering Valencia’s many plazas, especially Plaza de la Reina or “Queen’s Square”, with great shopping and dining nearby. And don’t overlook the City Market.

Reach Valencia by high-speed rail from Madrid or Barcelona and marvel at the city’s modern train station upon arrival. Given its location on Spain’s central east coast, Valencia also offers visitors Mediterranean beaches you won’t want to miss.

Equally outstanding as a travel destination is Lyon, located at the confluence of the Saône and RhÔne rivers and a two-hour TVG ride south of Paris. “They stole the French national capital from us,” a local guide proclaims, “but they didn’t get our history, art, architecture and, most importantly, our cuisine.”

Lyon reflects 2,000 years of history, with the 10,000-seat Roman Amphitheatre des Trois Gaules, medieval and renaissance architecture in Vieux Lyon (Old Lyon), and the modern confluence district on the Presqu’île peninsula. The Museum of the Confluences and the Museum of Fine Arts are well worth your time even if you are not a museum fan.

Begin your walking exploration of this UNESCO World Heritage City at the statue of Louis XIV on La Place Bellecour, one of the largest open squares in Europe. Then head to Old Town, the 19th century European center of the silk industry. You may still find a few silk weavers creating magnificent scarfs, ties and other silk items on hand looms. One such artist told me that a single inch of silk cloth the width of his loom requires 5,000 silk worm cocoons.

As a world-famous culinary center, Lyon features both Michelin-starred cuisine and bouchon brasseries, serving up Lyonnaise cuisine such as sausages, duck pâté or roast pork. For lunch, I recommend going a block off Old Town’s main street to enjoy the daily fare served with a carafe of Burgundy or Côtes du Rhône wine. It will be a memorable afternoon. Meanwhile, real foodies might consider a cooking class at the renowned school founded by Paul Bocuse.

From the Old Town, you also must explore the Travoules, covered passageways between buildings connecting Vieux Lyon and La Croix Rousse hill. I also suggest riding Europe’s first funicular to the top of the hill for a great view of the city and the merging rivers below.

Several RhÔne River cruises begin or end in Lyon, providing excellent opportunities for extended visits. [Caution: should you fly to Lyon, take a bus from the airport to center-city; a taxi will set you back as much as 60€.]

Valencia and Lyon are uniquely exciting, easy to explore and both should be in your future travel plans.